Whenever Nick preaches a revival out of town, we always try to explore the area if time permits. Sometimes our weeks are jam packed with activities but sometimes they are a little more flexible during a revival.  Last week was a flexible one and we were blessed to enjoy our surroundings a little bit.

We were both born and raised in Louisiana, but we have lived in Mississippi for right at 20 years now.  It's amazing to me how you can travel just a couple of hours from your house and be in unchartered territory.

This was our first visit to the sweet little town of Eupora, Mississippi.
We were blessed to stay in a wonderful little Bed and Breakfast that I will be sharing with y'all soon on here.  Today, I'm gonna hit the hi-lights of a few things we found while walking around the town.  And yes...we literally walked from our B&B to all of these places I'm about to show you. 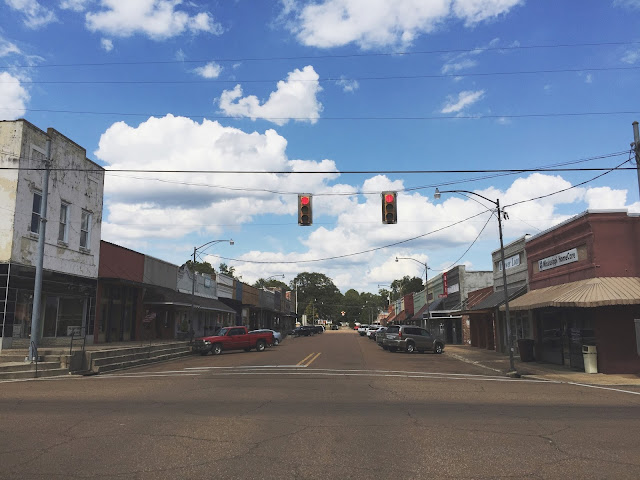 Just a block or two over we found an old abandoned building I heard someone call "The Triangle Building".  I'm always a sucker for a great wall. And when you throw in the perfect sun flare with a chippy aqua door.....well a picture has to happen.
(It still had Class of 69' spray painted on it!) 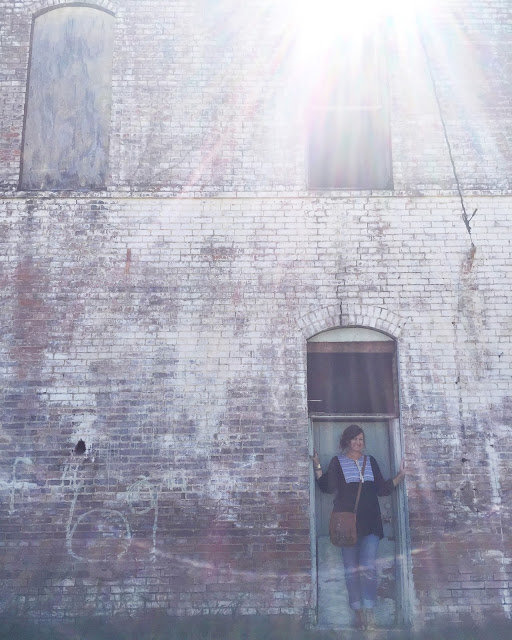 The building from the front....hence the triangle. 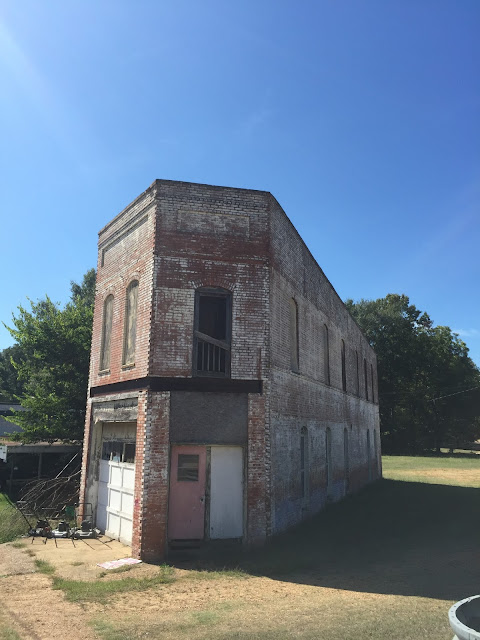 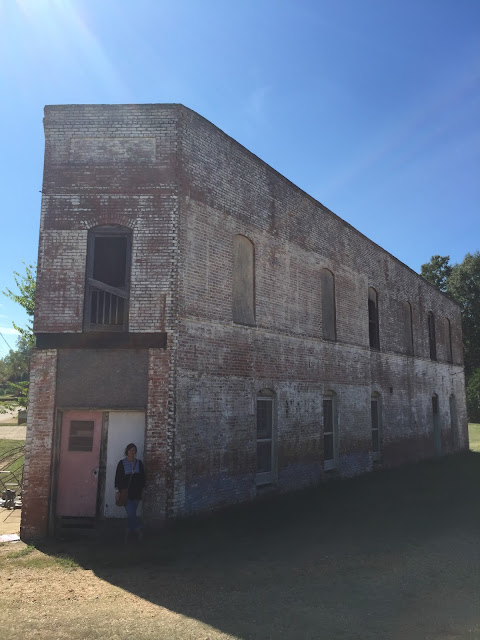 We set out exploring on Monday and soon discovered that most of the stores were closed. So if y'all are ever traveling through, keep in mind that the antique stores, shops and thrift stores are only open Wednesday-Saturday.  So we took a ride on the Natchez Trace instead that day, and ended up in French Camp.  I'll save that adventure for another time though.

Ms Carol, who owns the B&B we stayed at (Dogwood Cottage), highly recommended the ribs at Central Service... or The Grill as it's called by the locals. 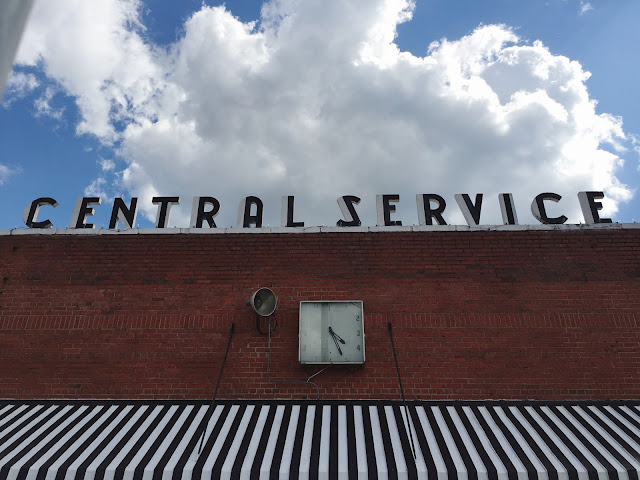 Ribs are one of my favorites and you could smell the smoke from the pit all over town as we walked around so I was feeling really good about having lunch there. 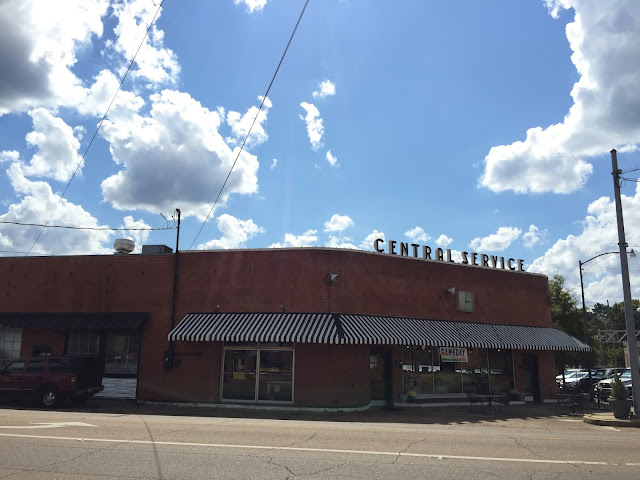 But apparently the ribs are so good that they had already run out of them on Monday by the time we stopped in.
We didn't give up though.... 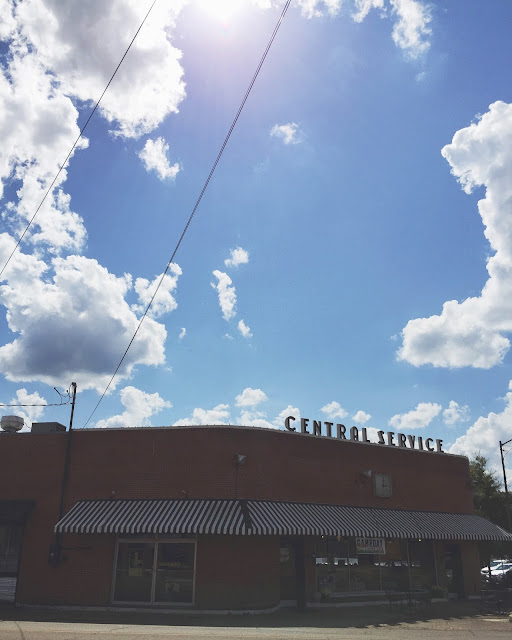 We came back on Wednesday, a little earlier this time and we were not disappointed. 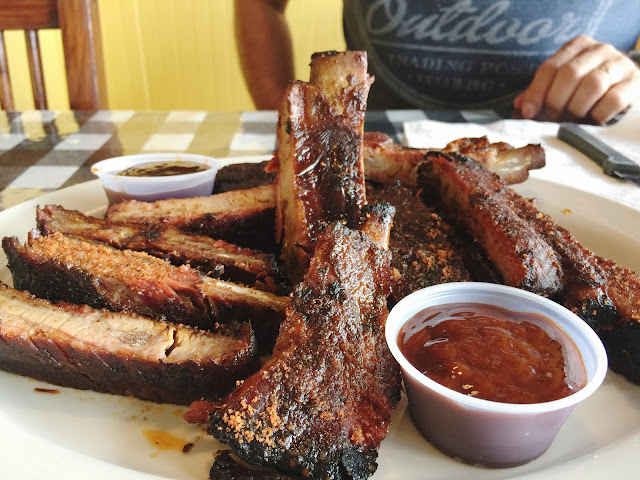 We both are rib connoisseurs and these totally rocked in our book.  We split a rack but we seriously could have eaten a whole other plate.  They were seasoned near perfect and were very meaty. 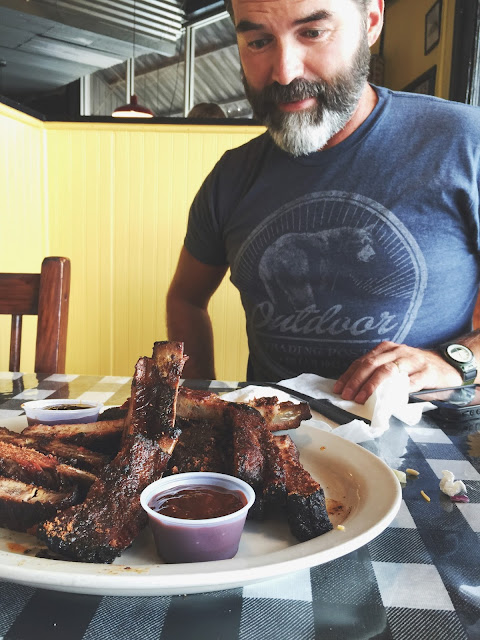 And the atmosphere is really cool too.  I love the tin on the ceiling. 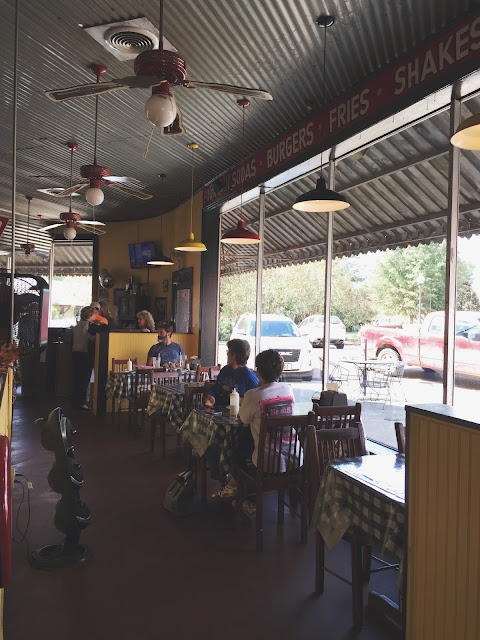 I would recommend going if ya'll are ever in this neck of the woods. 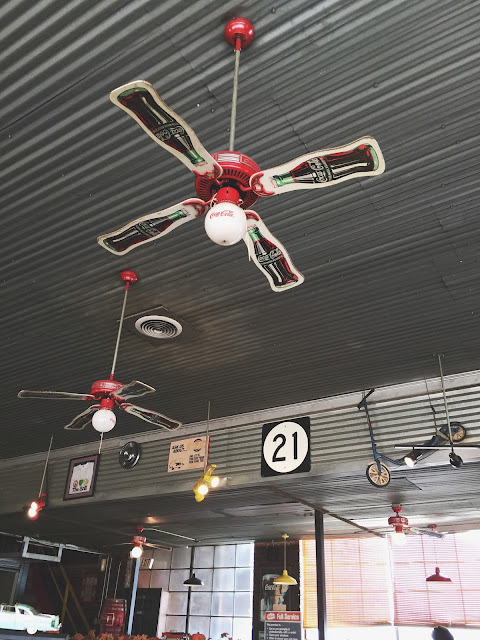 After lunch we explored the little town. 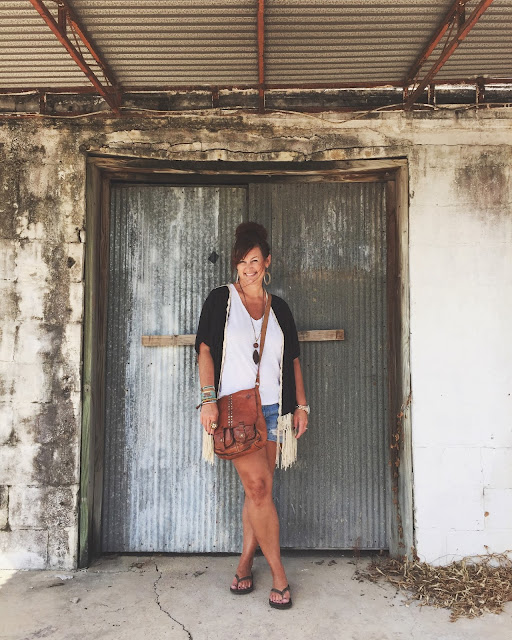 We discovered a great little alley with some amazing walls. 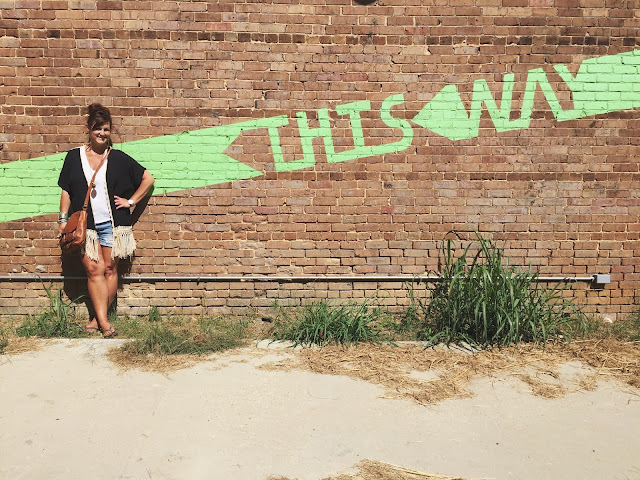 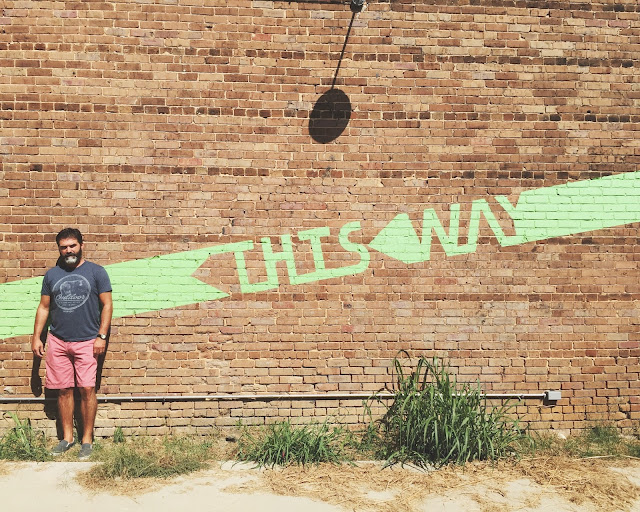 Everywhere we turned there was an old wall with great brick. 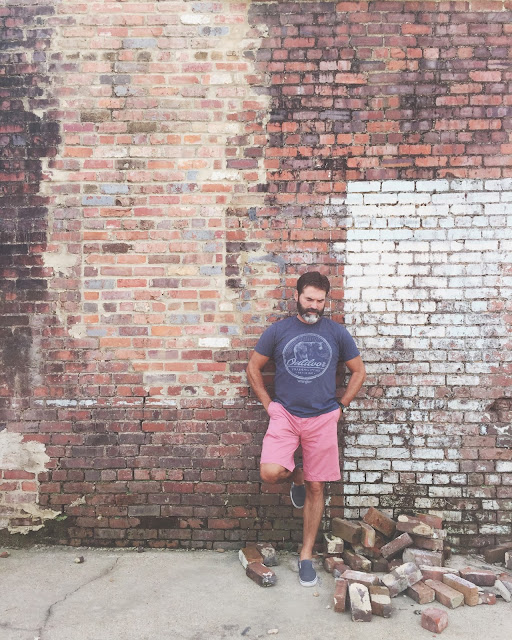 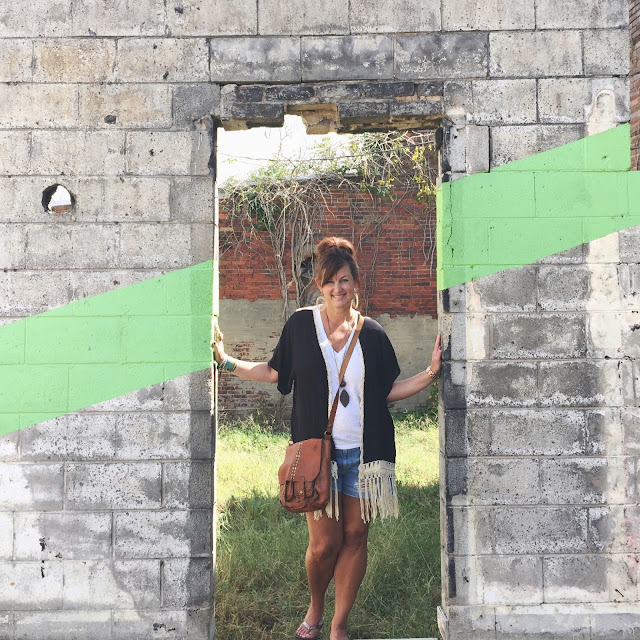 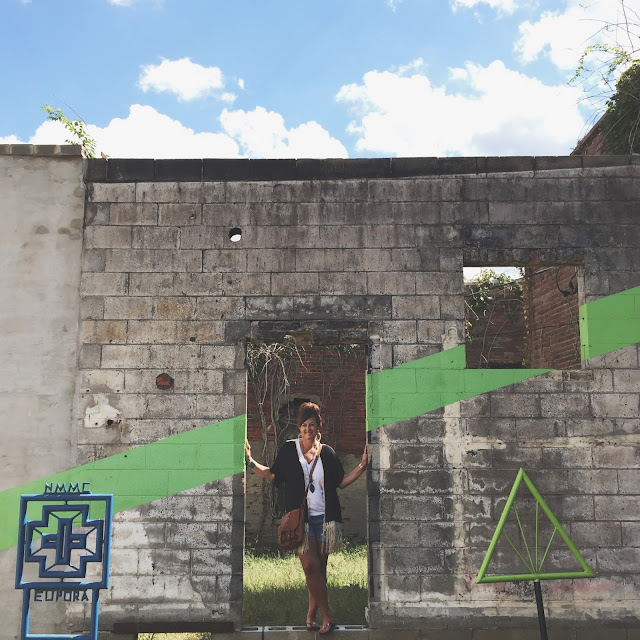 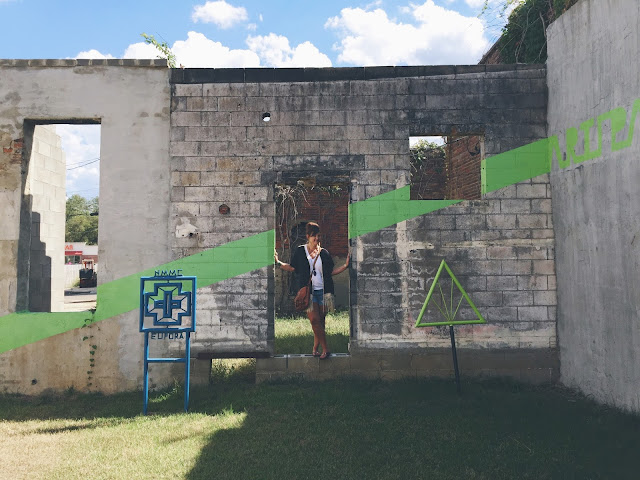 Nick convinced me to climb up in the hole on the left.  Its higher than it looks
Once I was up there, he spies something and says
"Hang on. There's something up there you probably won't like in the picture." 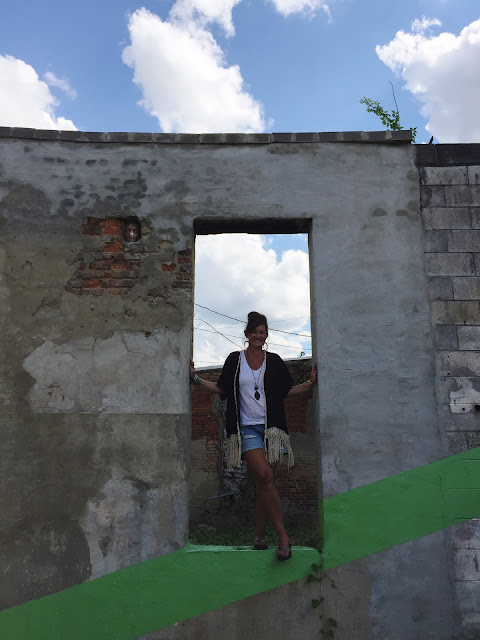 I IMMEDIATELY think LIZARD!! And try to jump down because if that think had fallen on me I would have had a heart attack. Or at the very least, an accident. In my pants.
I don't do lizards.  I was scared to death to even look....
But he convinced me to stay up there and eventually to look. 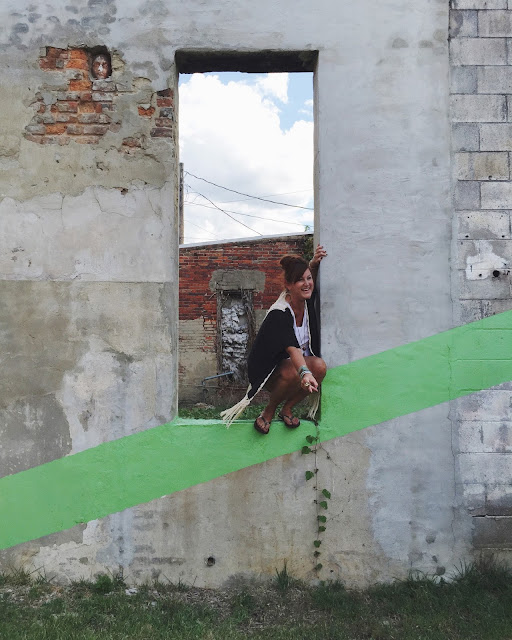 It was a HEAD in a hole in the wall. 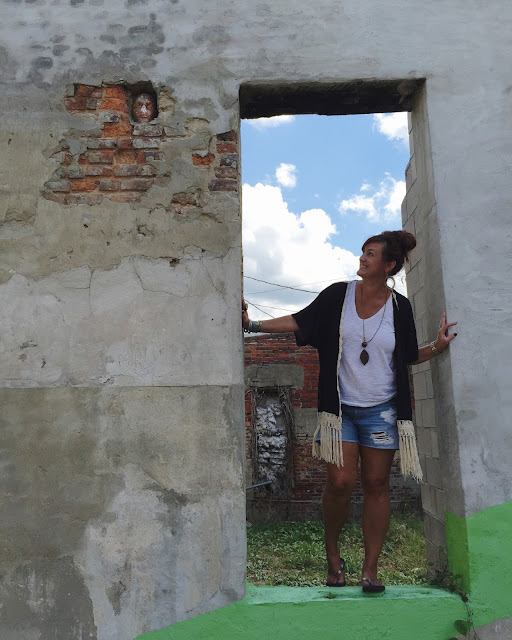 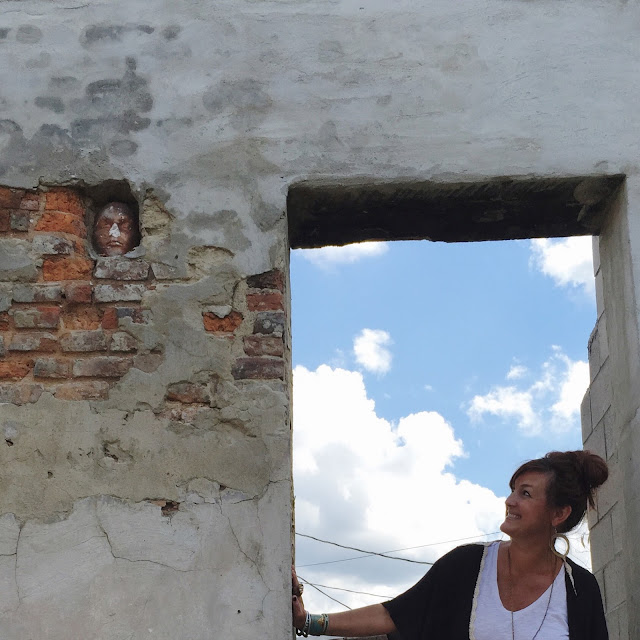 Then we found this wall with all this color!
I want it in my house! 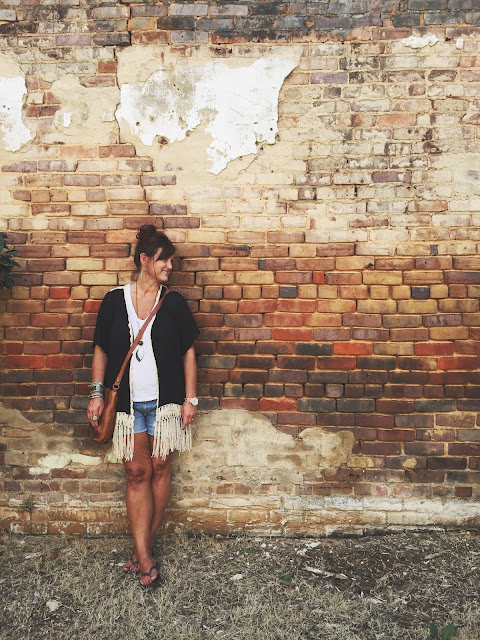 We each took a pic and I tried to morph the two pics together.
I was so focused on lining up the brick, I never paid attention to the fact I cut off half of Nick's hand. 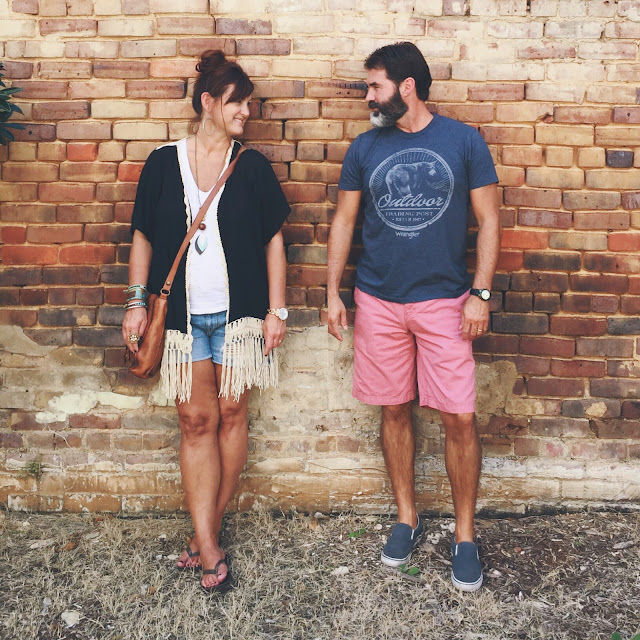 We wrapped it up with a a little thrifting.
I fell in love with this canvas. 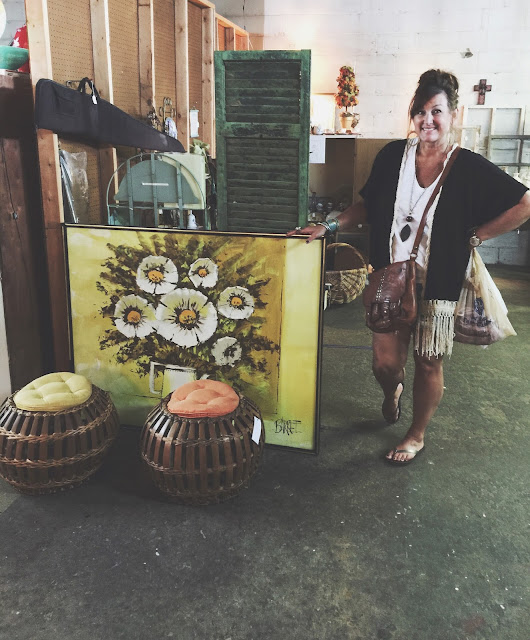 It totally came home with me. 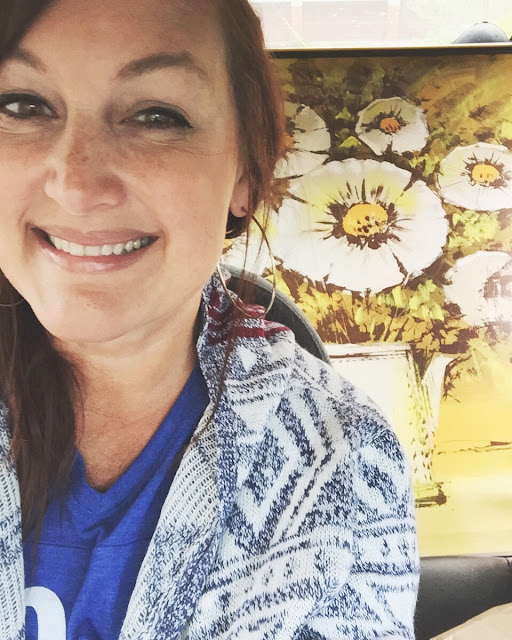 When I went back with the car to pick it up, I gasped when I saw this old Texaco tanker in the window.  Nick's family used to own a Texaco station and I about flipped.
The owner of the store gave me a super sweet deal since it was sentimental to our family.
We gave it to his daddy who was seemed to be tickled to death. Do guys get tickled to death? I'm not sure if that's the right choice of words, but he liked it a lot and really was touched by it. 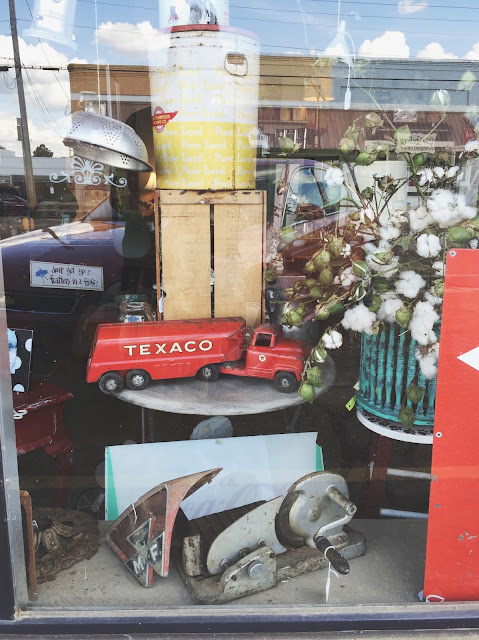 So if you ever find yourself traveling through Eupora, Mississippi I hope you take a minute to stop and smell there roses there.  You won't be disappointed with this sweet little town. 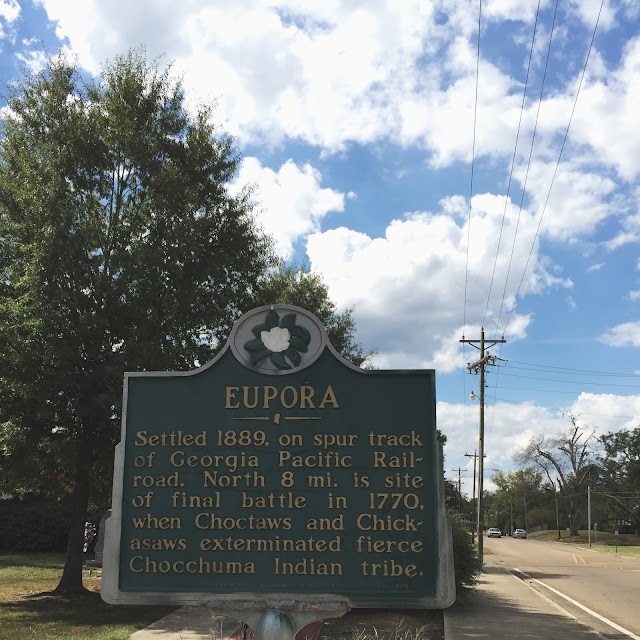 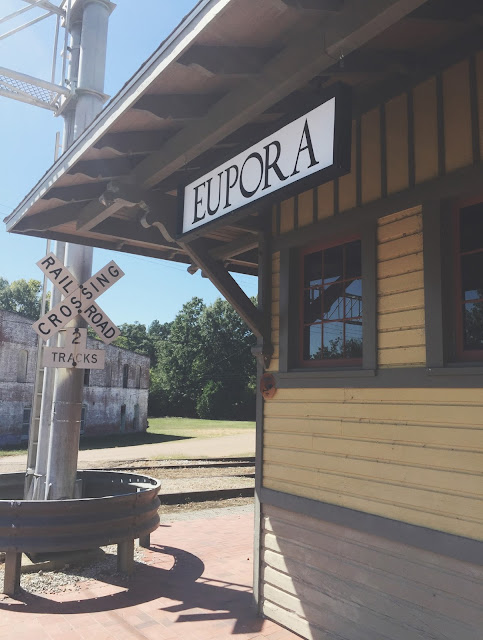 And for those of you who have been  hanging out with me one here everyday for Write 31 Days,  then you are probably aware that I missed a day.  I let my four hour sunday nap get the best of me yesterday.  I ain't throwing in the towel though.

Email ThisBlogThis!Share to TwitterShare to FacebookShare to Pinterest
Labels: 31 Days of Hanging with Honey, mississippi, my life, travel