Let me tell you why puzzles are so important in our house.
You see, years ago when our girls were young, we shared with them our heart on the subject of dating. We really didn't want our girls to date...to "try out" guys and give pieces of their hearts and emotions away to different boys here and there.  We were leaning more towards "courtship" for our girls.
I've come to realize that the term courtship means different things to different people.
We believe, according to God's Word,  He has created each of our daughters to be a help mate for a specific young man and that in His timing, He would reveal who that was to her and us. So for us courtship meant no "casual dating"...before any time was invested in a young man, we wanted our girls to discern if they could spend the rest of their lives with this person. Now don't misunderstand, we weren't trying to get our daughters married off or having them on the look out for a husband...  we just didn't want them to feel depended on the need to be in a relationship and doing activities just for the sake of having something to do that is the "normal" thing for teenagers in our culture.
We have always taught our girls about their gift of purity and saving themselves physically for the man the Lord has created for them until they are married.  We've taught  them about doing things the way God designed and what a blessing it will be for them to walk in God's best in this area... But we also desired for them to save themselves emotionally for their husband and we believed casual dating would jeopardize that.
So with that understanding in our house, we shared with our girls our vision of  the puzzle.
When a young man began to show interest in them and they discerned that he may be worthy of their time and they desired to get to know him better, it was made known to him that  he was required to purchase a puzzle and bring it to our house and then have a talk with their daddy.  If their daddy felt like the young man was worthy to spend the time needed getting to know our daughter, then he would have to prove his devotion by making the commitment to put together a 1000 piece puzzle with us before he was allowed to take our daughter anywhere apart from hanging out with us.
The whole intent of this was for us to be able spend time with him ourselves in the weeks ahead as we put the puzzle together as a family.
Well...we've had three young men show up at our door with puzzles in hand.
Today is the anniversary of when Lydia and Marcus completed their puzzle three  years ago and could officially go on their first "date".
February 27, 2009.
I think they ended up at Taco Bell.  :)
Here is their puzzle journey....
"The Puzzle" 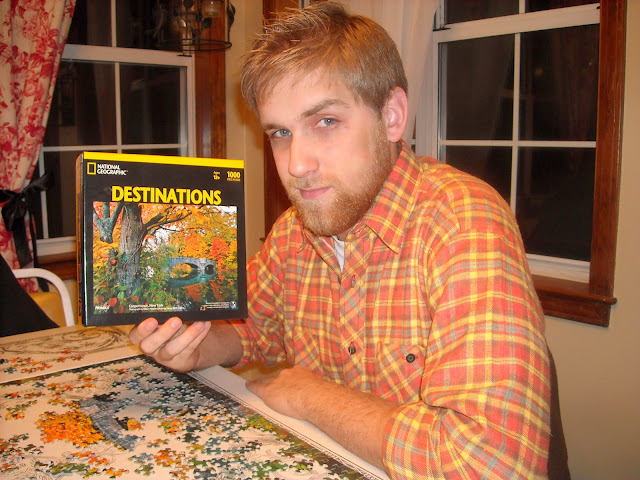 We thought the name of the puzzle was so ironic!
Reaching their "destination"  seemed like it was gonna take forever and a day at this stage.... 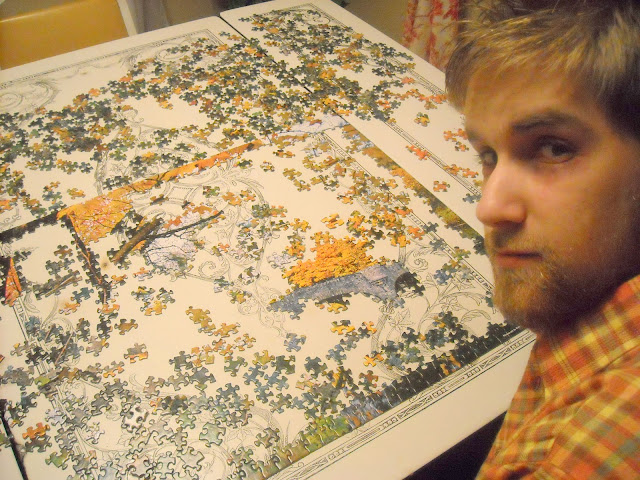 They were still smiling though :) 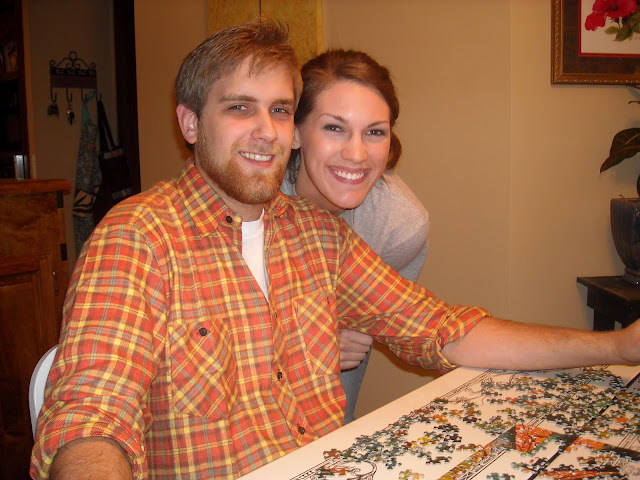 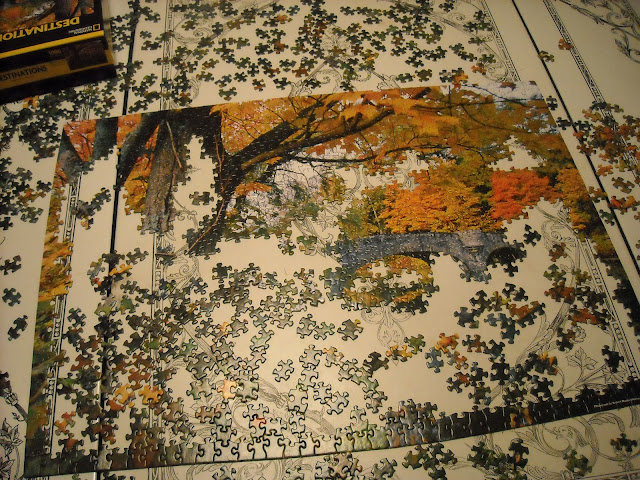 This is his "Lydia, you better be worth this" look.... 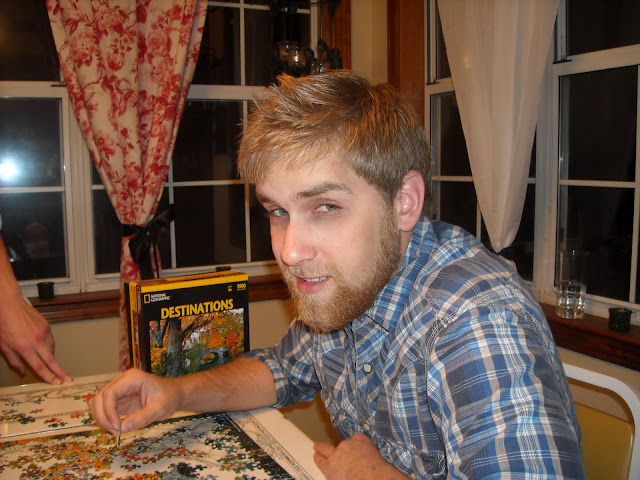 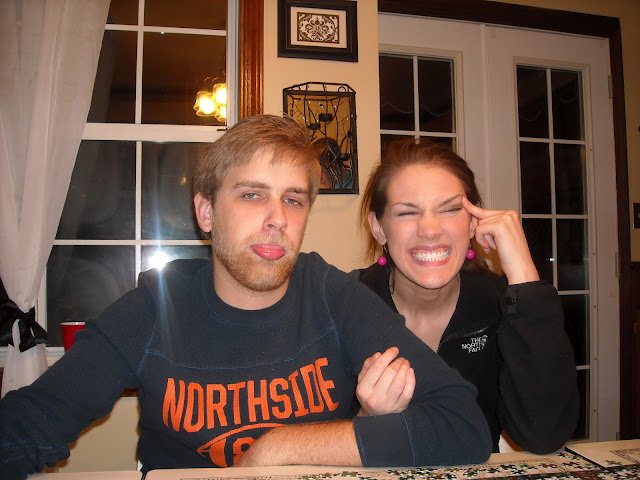 There were many a nights spent at this table..
Many conversations were had.... 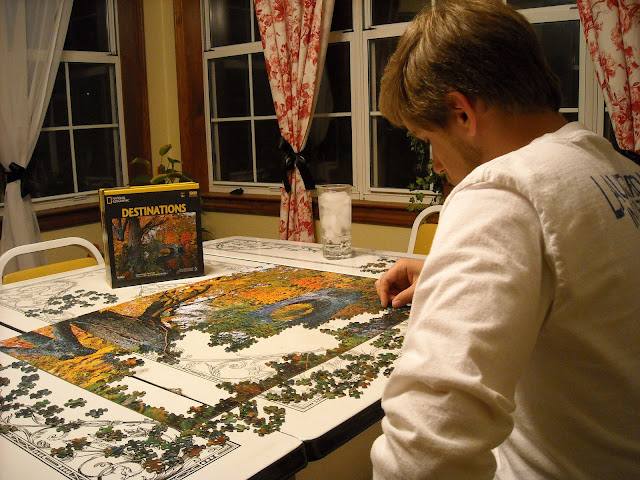 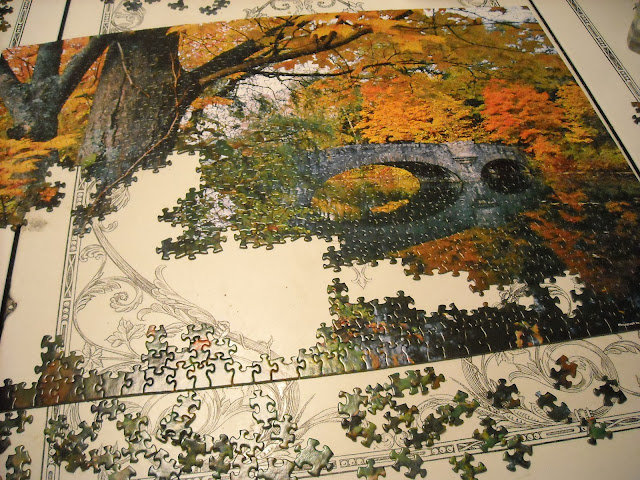 We were really getting to know who this Marcus Linton was who had won our daughters heart. 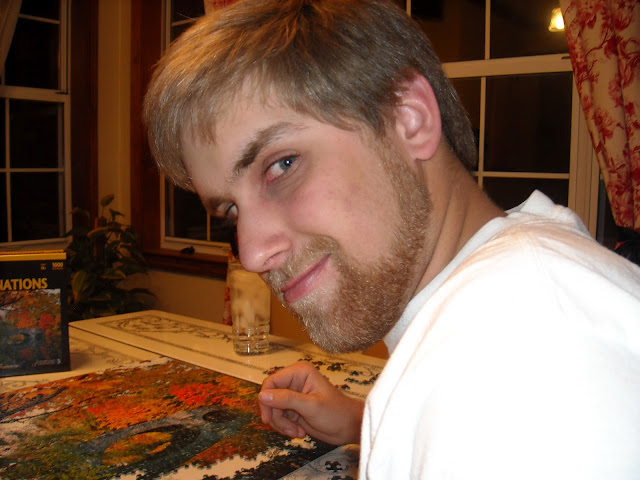 It was a family event... 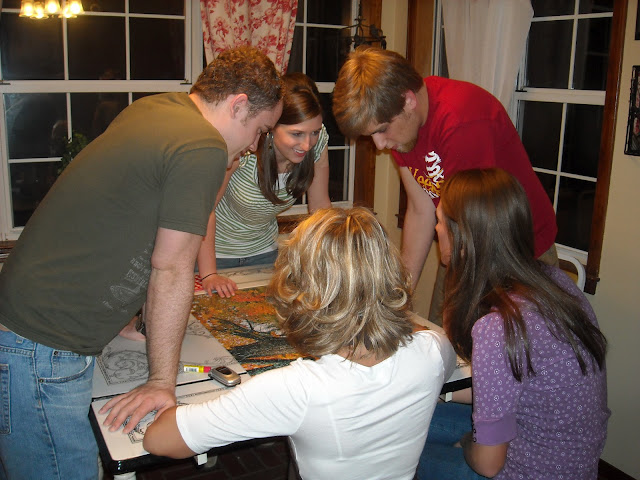 Marcus got encouragement from Chris...who had already faced Bro Nick and survived.  lol
Some good moral support from the son-n-law section. 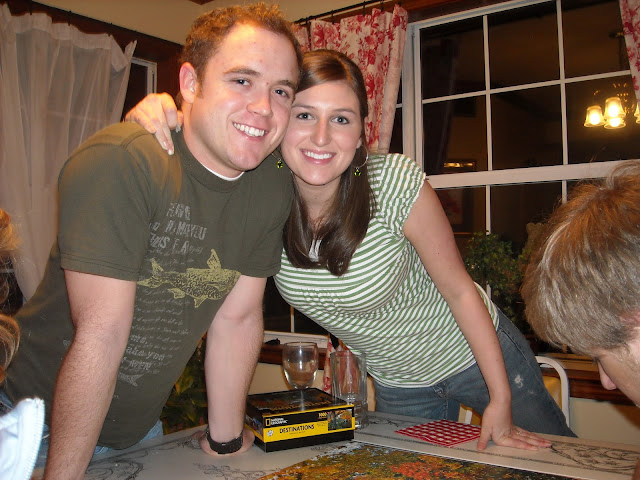 I jumped in and helped too.
i even helped them out when they weren't there....shhh..that's our secret ;) 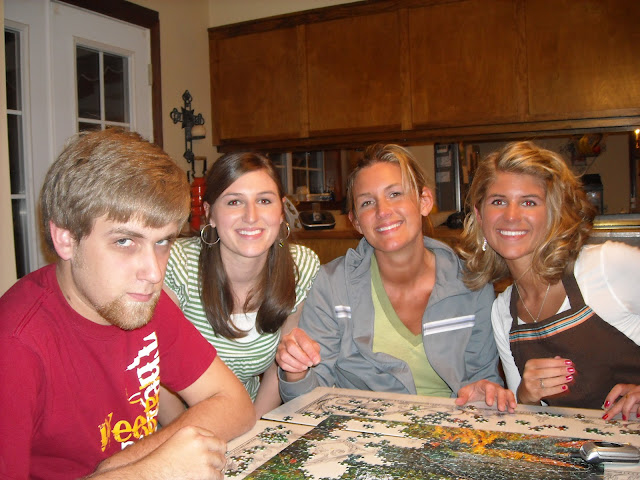 Lots of fun memories were made around this table.
I believe Rosalyn even  learned the Macarena during one night of puzzle time. 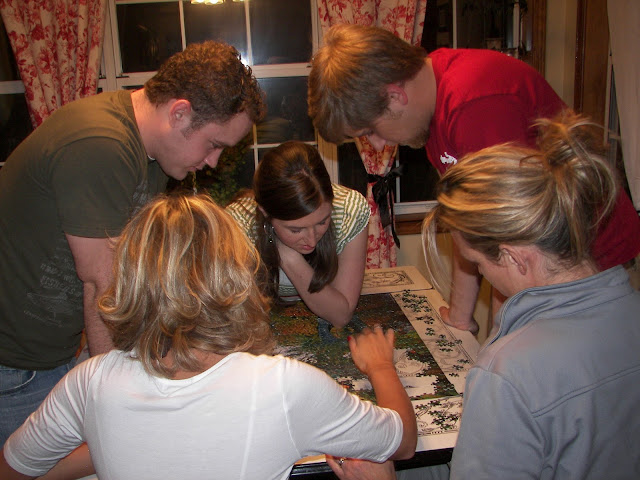 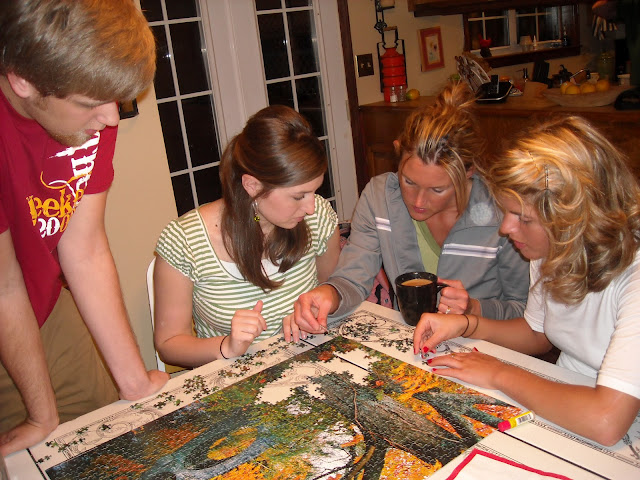 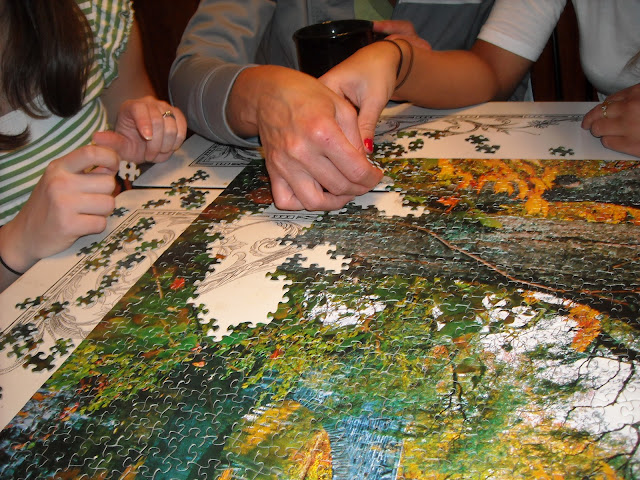 Determined to finish it...this night! The end is NEAR! 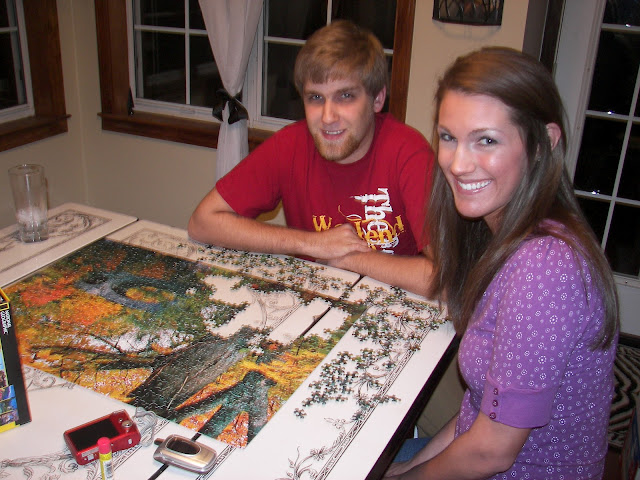 Lydia is getting giddy! 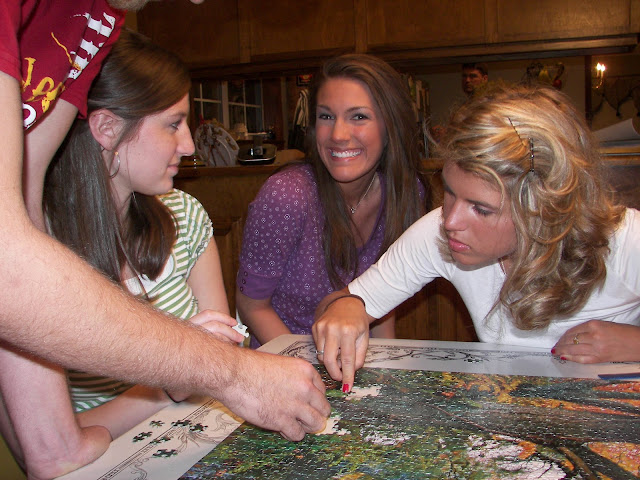 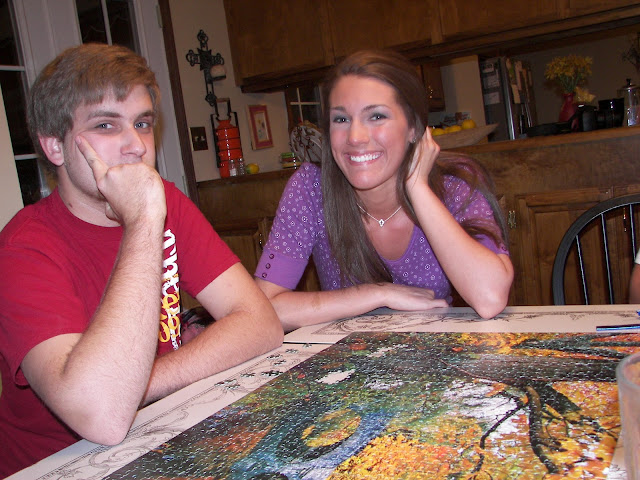 Here they are at the end...just one piece left and they begin to get worried.... 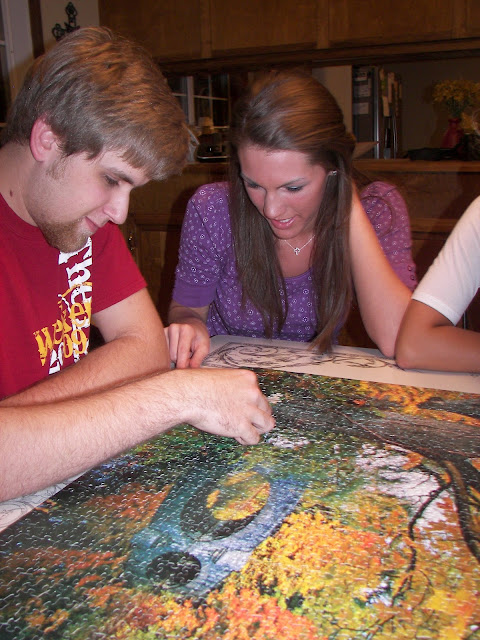 If you notice the bottom left of the puzzle...after all that work, they are missing a piece!! 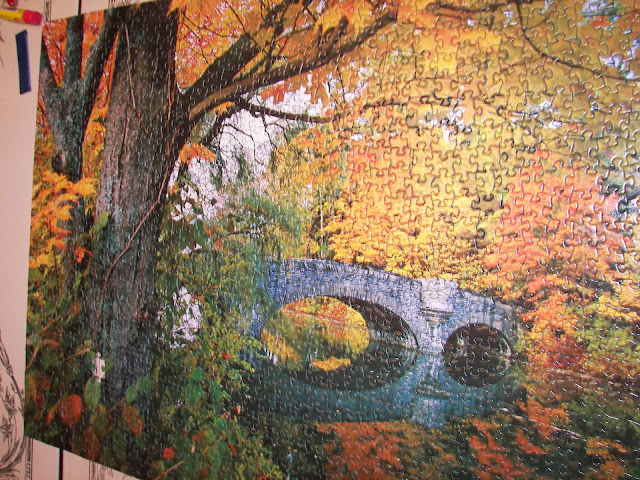 Unbeknownst to even me, her daddy had hidden a piece of the puzzle all along.
He let them sweat it out a little bit and then brought out this little box. 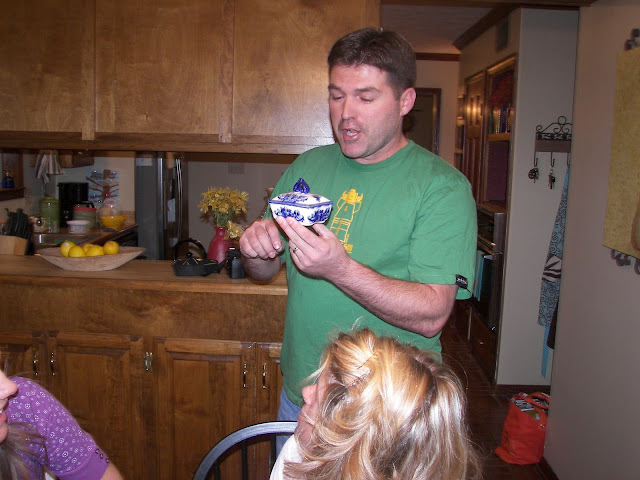 It had the last piece in it and he shared with Marcus, how just like that last piece of puzzle was so precious to them......so was Lydia precious to us. And he needed to treasure her and value her and take care of her when she was in his care. .....
Then he gave Marcus the last piece. 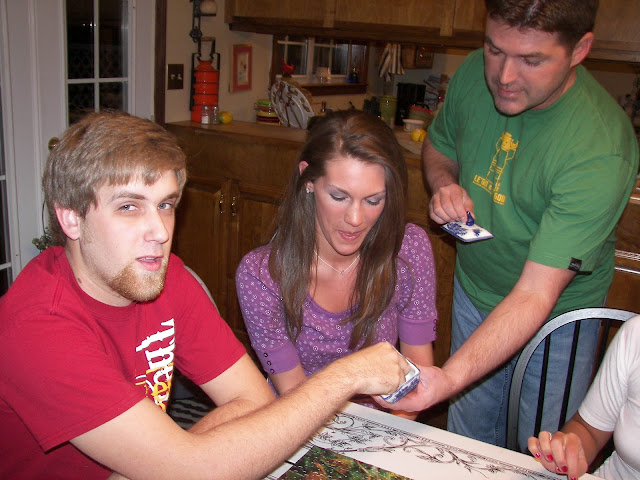 I love their faces! 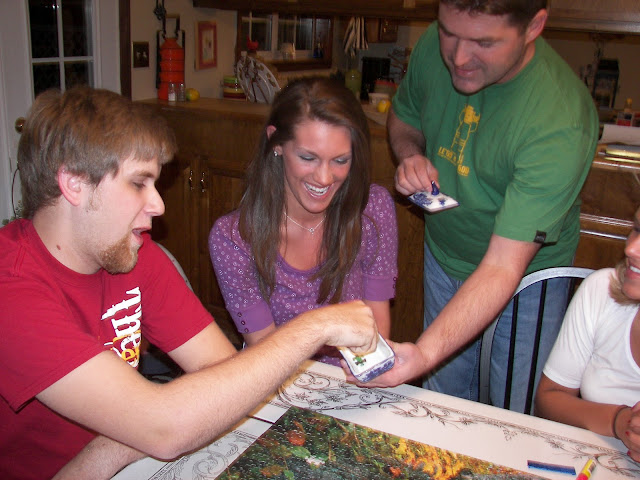 And the last piece goes in! 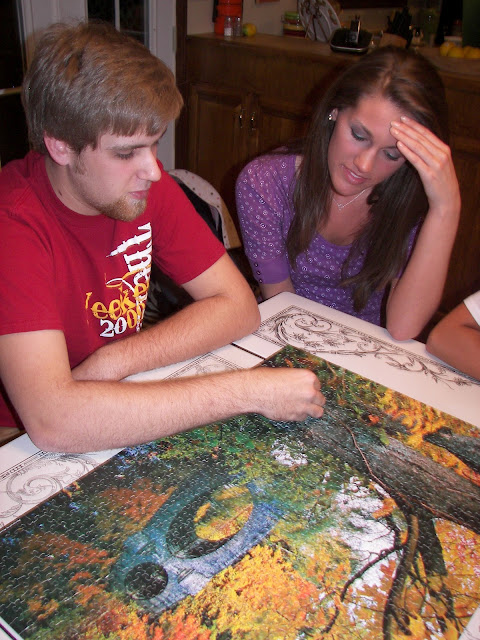 
Which was exactly what was supposed to happen. 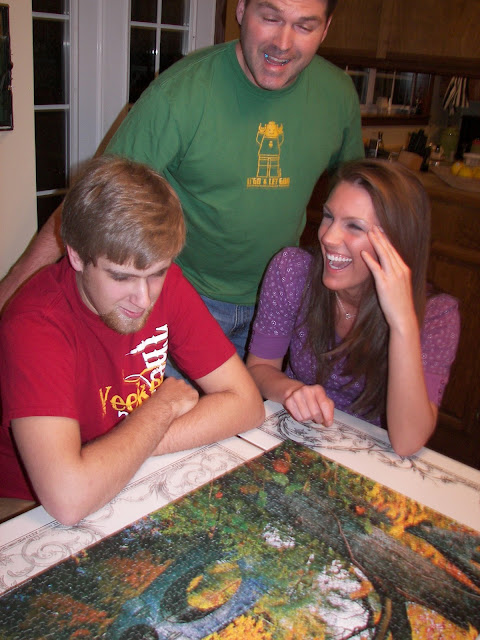 February 27, 2009
Happy Puzzle Anniversary to the soon to be Mr. and Mrs. Marcus Linton. 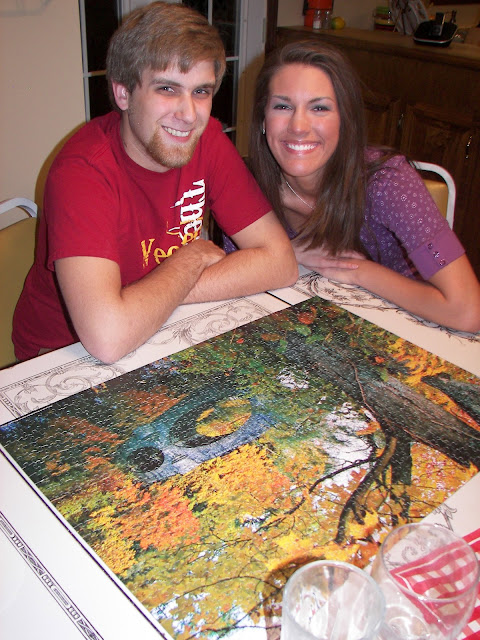 That night was just the beginning :)
I'll tell y'all about their engagement one of these days...I promise. ;)
Stephanie :)
ps.  i forgot to mention I dropped the puzzle transporting it upstairs before we glued it together.
Yeah.  I did that.
It wasn't a good day for me.

Email ThisBlogThis!Share to TwitterShare to FacebookShare to Pinterest
Labels: family