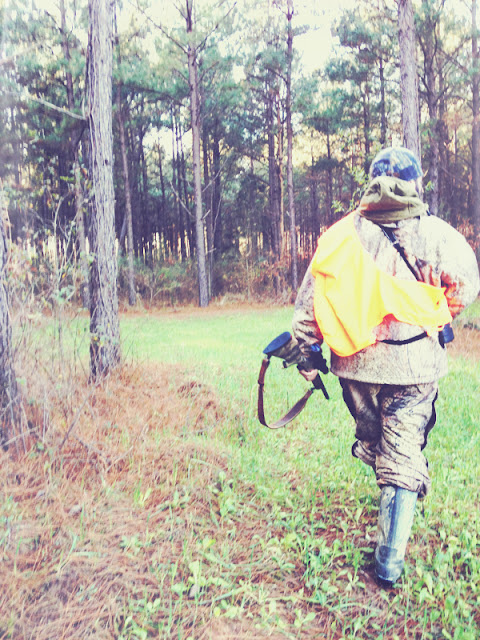 My man loves to hunt.  I think it's something that is in his blood.
He grew up hunting and it's something he enjoys thoroughly.
He went for many many years not really being able to indulge himself with the time it takes.
When he was in the Navy, he was deployed more than he was home.  And we he was home, he wanted to be with his family and not alone in the woods.  Then we moved to Mississippi, the Lord called us into ministry and again....his time was so limited.  Our girls were still young  and very active in lots of stuff.  My man always chose time with his family over time in the woods.  He was always present.  Always there.  He did hunt but it was a hit and miss kind of thing.
For this reason alone, I've never been one to complain about him heading to the woods when he did get to go.  He made so many sacrifices, I was always glad for him when he got the chance.

Well, fast forward a few years.....we are now in a different season of life.
Our girls are now grown. The activity level has decreased substantially as far as time demands and schedules these days...no more soccer games and driving to and from school or church activities and stuff.  And ......the Lord called us out to a little church in the country.  The country that just happens to be deer hunter heaven.   If you mention Porterville in a conversation, 3 out of 4 times the other person will say that they or someone they know has a deer camp in Porterville.

It has been such a blessing for me to see him enjoy doing something he loves so much.
I do believe he may have hunted more in this one season than what he's been able to do all these years combined.  He's very selective with what he shoots.  He doesn't  kill just for the sport.  We eat everything he brings home.  Now would he like a big trophy for the wall? Uh...yeah.  And I would love that for him...but the allusive Big Daddy hasn't shown up....he's killed a buck and a few does for meat in our freezer but that big trophy just hasn't been seen this year.

Which takes me to today.  Today is the last day of deer season.
I'm hoping the big one steps out for him.
I'm hoping when I hear the humming of the 4-wheeler pulling up that I look out and see a big rack on the back.  But if that doesn't happen...I'm just thankful he had this season.
That the Lord blessed him with the time to do it..
Next year may be different.  Only the Lord knows.
But for  this season, I'm thankful.
Thankful for my husband who has always put his family before himself.
Thankful for the meat in the freezer that he has provided.
Thankful for the men in our church who has blessed their pastor with permission to hunt on their land.
Thankful for Nick getting the time to enjoy doing something that he loves so much.
Thankful that after today,  I can reclaim my back porch once he puts all his gear away.

And I'm thankful that this year, I went with him.
I went one other time when we were 15 years old and I hated it.
We both agreed it was probably best if we didn't try that again....until a couple of weeks ago.
27 years later, I dressed up in his gear and off we went into the woods.
A lot has changed since the last time we sat in a stand together... like being called to serve together  in full time ministry, 3 incredible daughters, 2 godly son-in laws and with another one coming soon, and the cherry on top....three grandchildren.
Well....lets just say that any happily ever after dream that I could have come up with that freezing cold day in that stand as I sat there  trying not to talk or make any noise so I could impress this amazing guy doesn't even compare to the actual  life the Lord has given us.

Yes,  this girl is thankful. 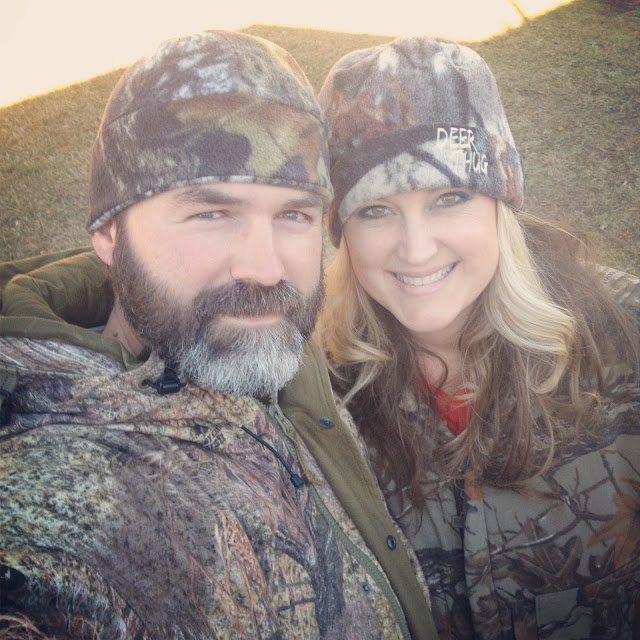 I'm thankful for the invention of iPhones too that gave me something to do... 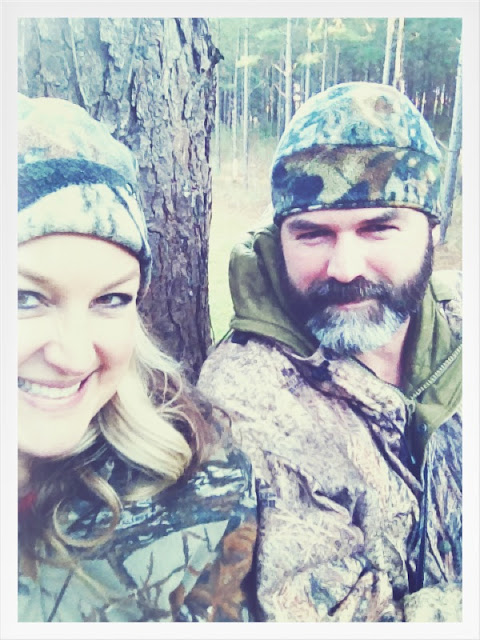 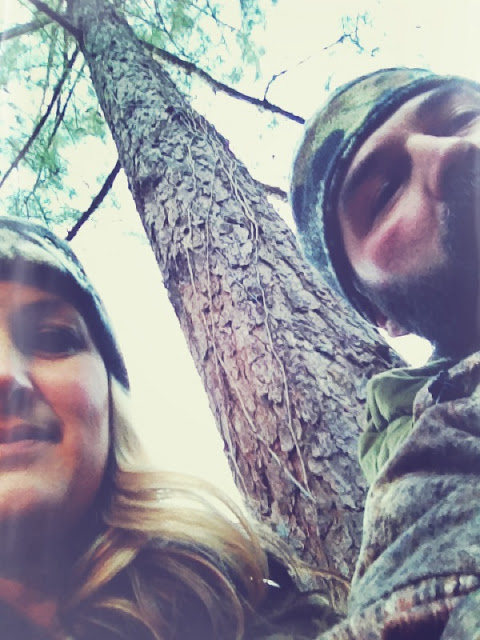 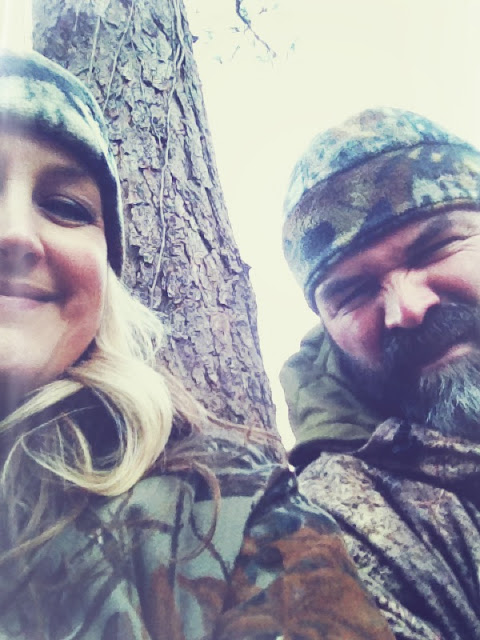 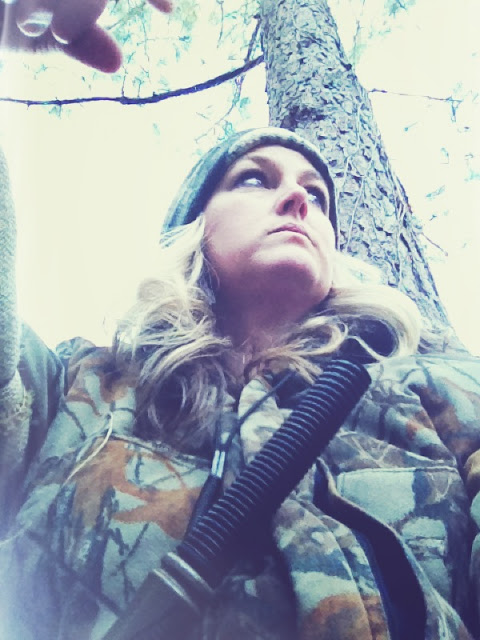 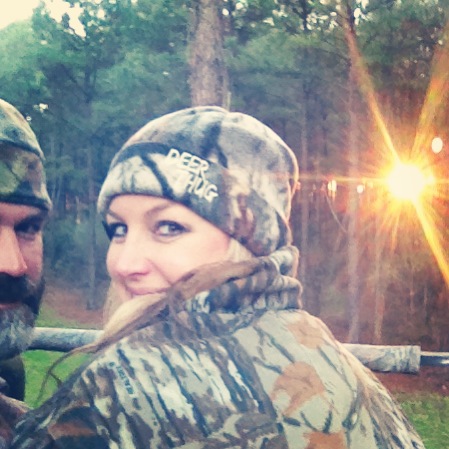 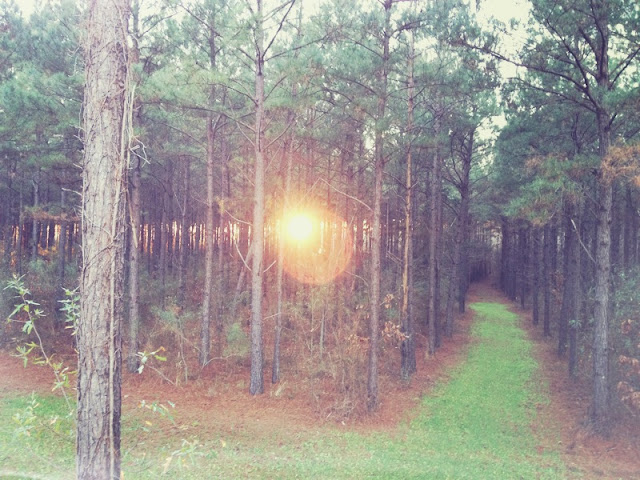 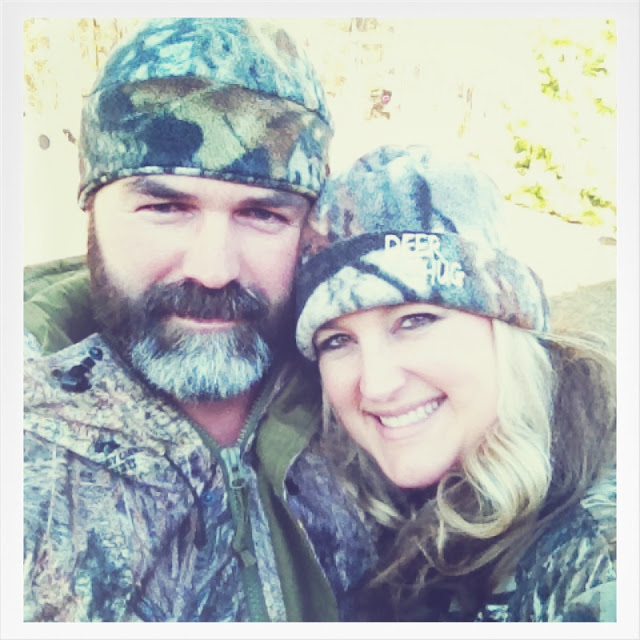 Email ThisBlogThis!Share to TwitterShare to FacebookShare to Pinterest
Labels: my life, True love