Nick and I are always thankful for teachable moments with the grand kids....times where we can impart eternal truths that will stick with them for life.  We wasted the early years when our girls were this age living for ourselves and we try to redeem the time everyday now.  One of my favorite teachable moments happened while they were staying with us this last time.

We loaded them up on the four-wheeler in their pj's and rubber boots to go feed the donkeys.
It was a normal day in every way...
until the ride home. 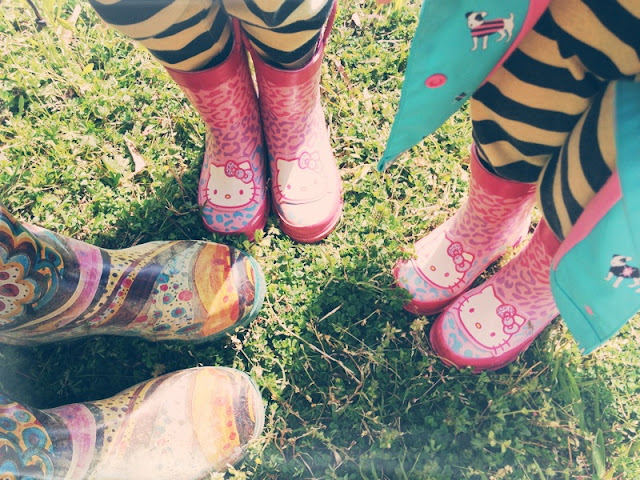 We checked the mail and was about to head to the house when we noticed something standing in the road just a little ways up the road.  It was a little yearling doe.  We figured it would run off but we headed in that direction to give the kids a closer look.  We knew immediately something was wrong when we were able to get this close to it and she didn't even budge. 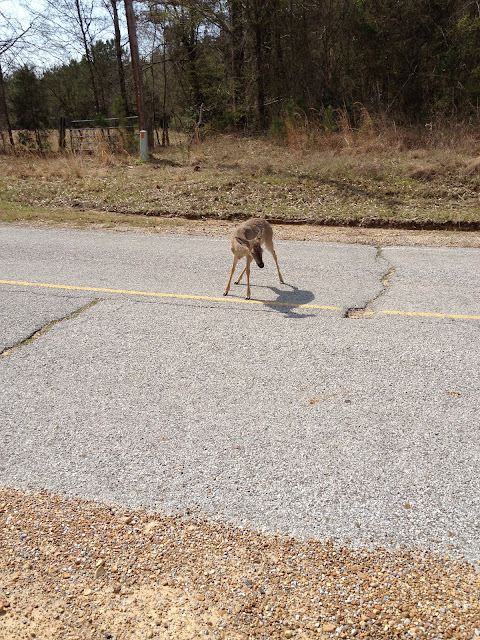 Nick pulled us over to the side and he got off the four wheeler to check out what was going on.
She had been hit by a car and was in shock. We all just sat there in amazement as we watched him pet her and talk to her gently. 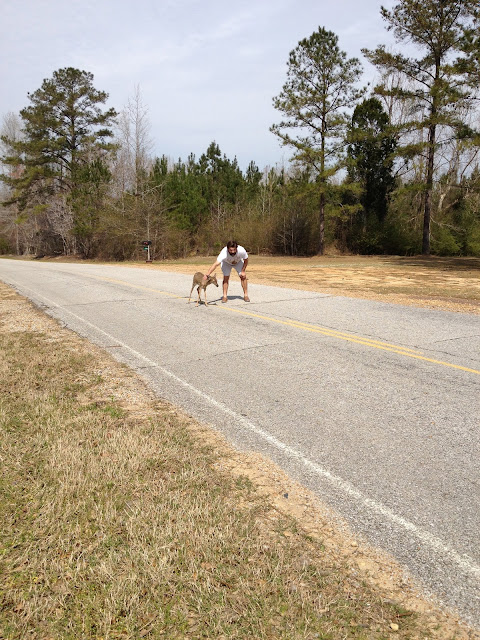 She would not budge for anything so Nick picked her up and carried her to the side of the road.  She was so worn out she could barely lift her head.  The girls and I were crying over how sad it was and I really thought she was dying right in front of us.  Nick decided to bring us home and come back and get the deer.  Deer getting hit by cars are a pretty regular occurrence where we live and we knew she probably wasn't gonna make it.  But we decided to seize the moment....and teach the girls first hand about compassion..... and possibly death. 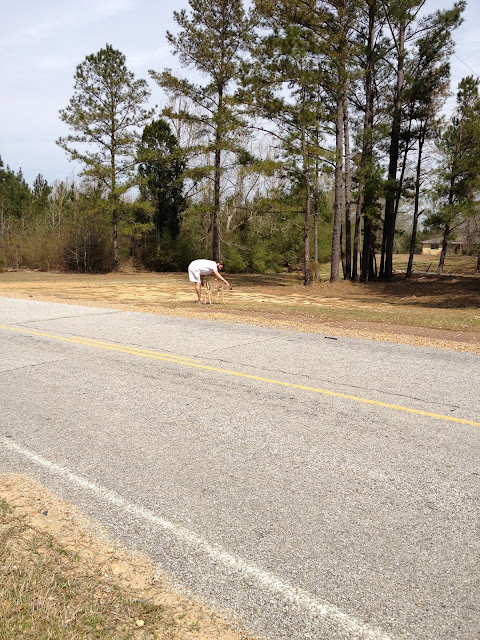 By the time he got back with her, she was pitiful. She was so tired and so near death.
The kids were amazed as they watched their paw paw tenderly pet her and talk to her gently, as he tried to keep her calm and as comfortable as possible. 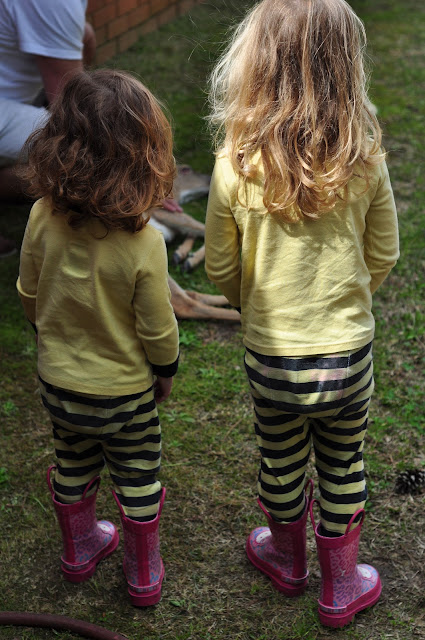 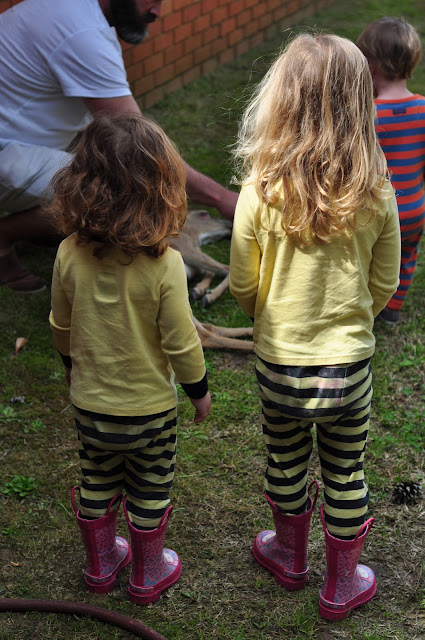 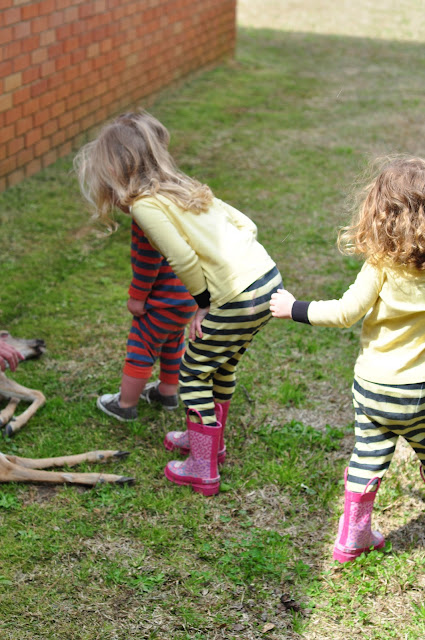 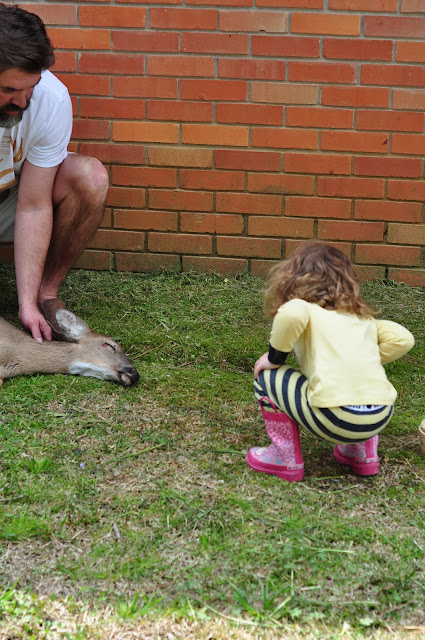 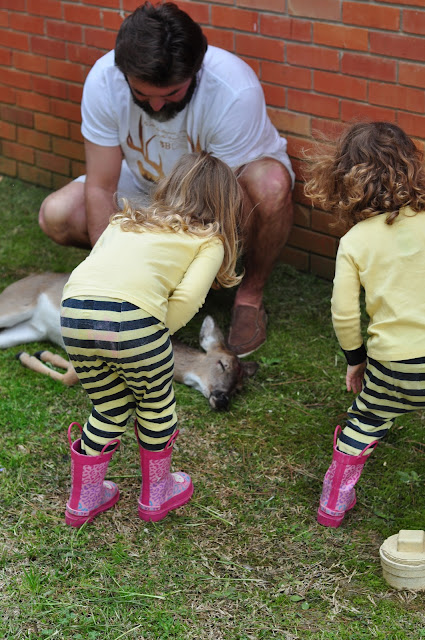 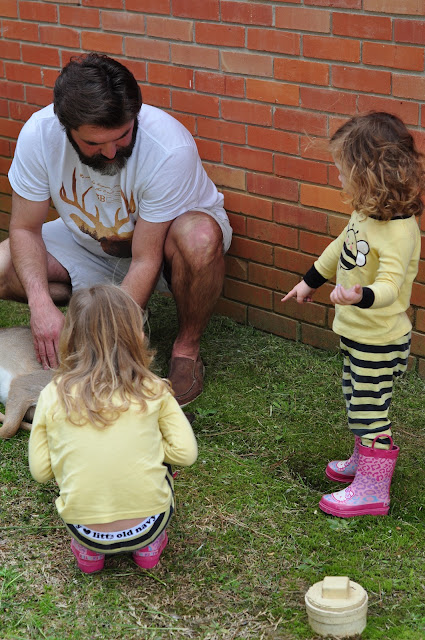 All those tough questions that us grown ups don't always have answers to.  We were honest with them and told them that she might not make it.  But that we were gonna help make her as comfortable as possible and we all prayed and asked the Lord to heal her if it be His will. 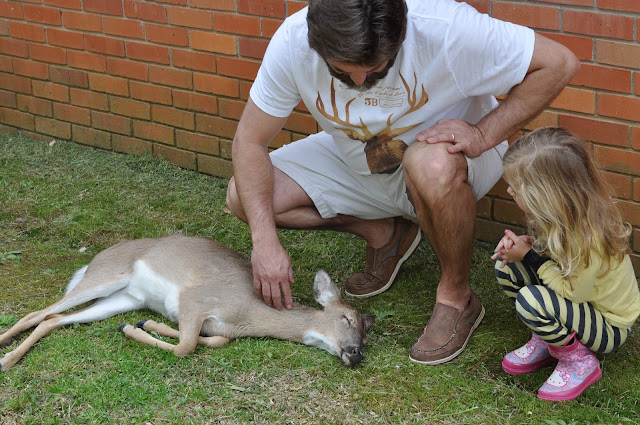 They even petted her themselves....being so gentle and kind.  Mimicking what they saw their  Paw Paw doing. 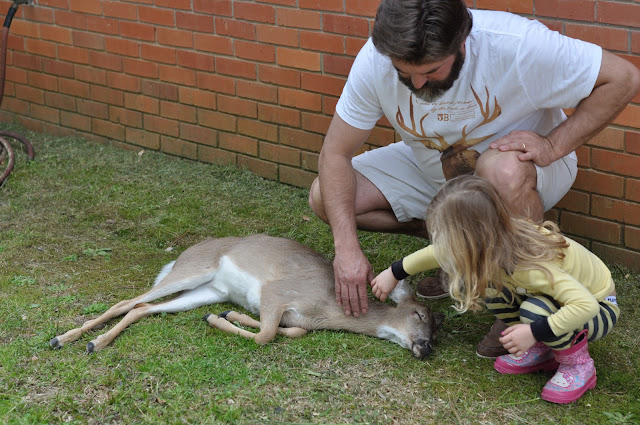 Bill, one of the men in our church, is our resident "vet".  He raises cows and donkeys and has a heart the size of Texas.  Nick calls him "Boaz" because of his thoughtful and generous spirit.  We called him and he came by and picked her up and brought her to his house where he has a pen. He wasn't sure if she was gonna make it either but he gave her some antibiotics and cleaned up her wounds.  We knew that the next few hours would be crucial.  So we just continued to talk to the girls, preparing them for her possible death and sharing with them what a blessing they were to the little deer keeping her company so she wouldn't be alone. 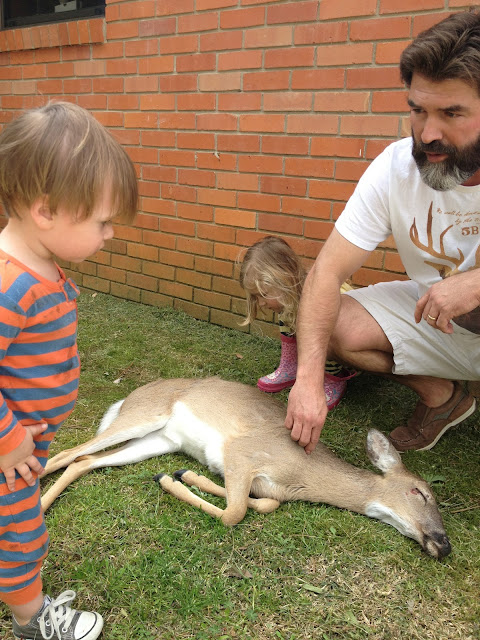 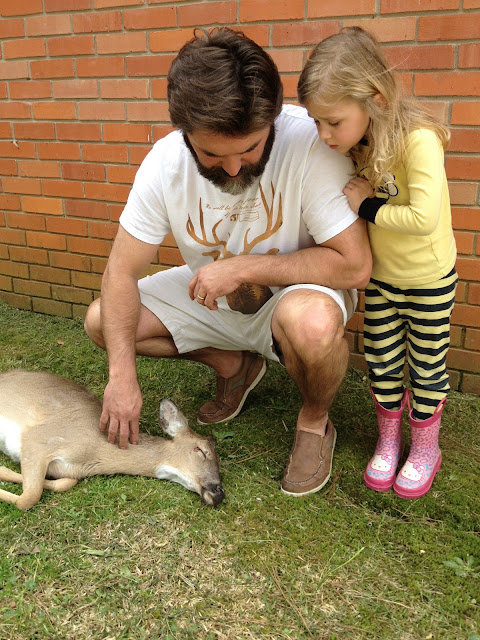 I couldn't wait to see Bill the next morning and I could tell by his expression when I saw him at church that it was good news!  She had made it through the night and up on her feet and looking much stronger!  We couldn't wait to go check on her!

The girls had named her and couldn't wait to tell her.  Rosalyn wanted to call her  Pearl but Jules liked "Pickle" because she had heard her Paw Paw say she was "in a pickle" when we found her.  It was a big debate over which name so they compromised.  We call her P.P. ....short for Pickle Pearl. 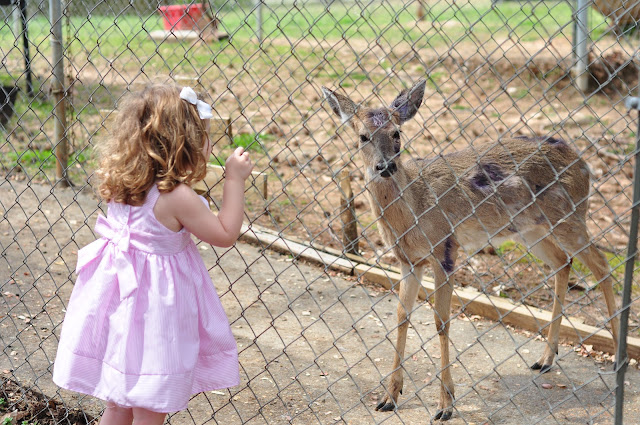 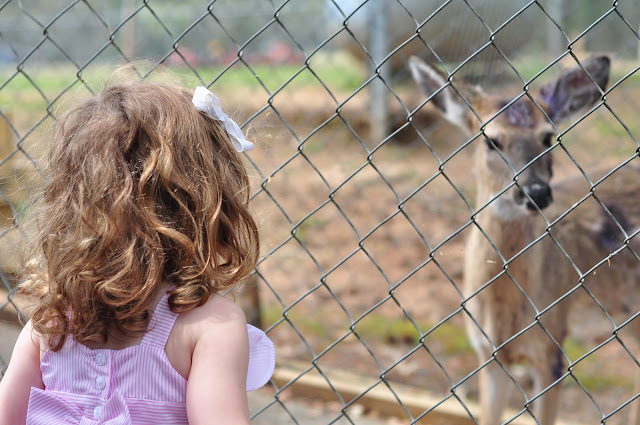 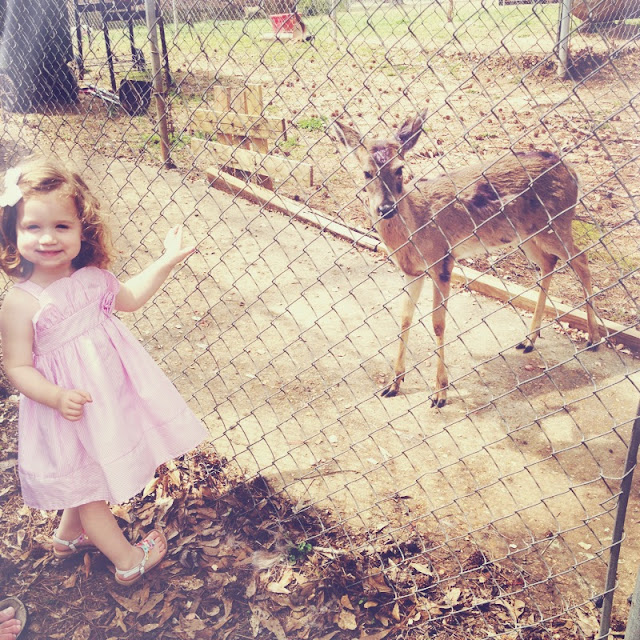 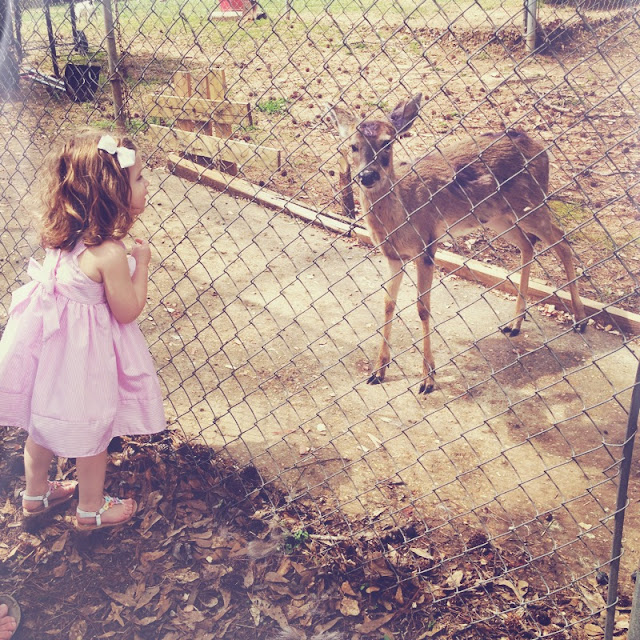 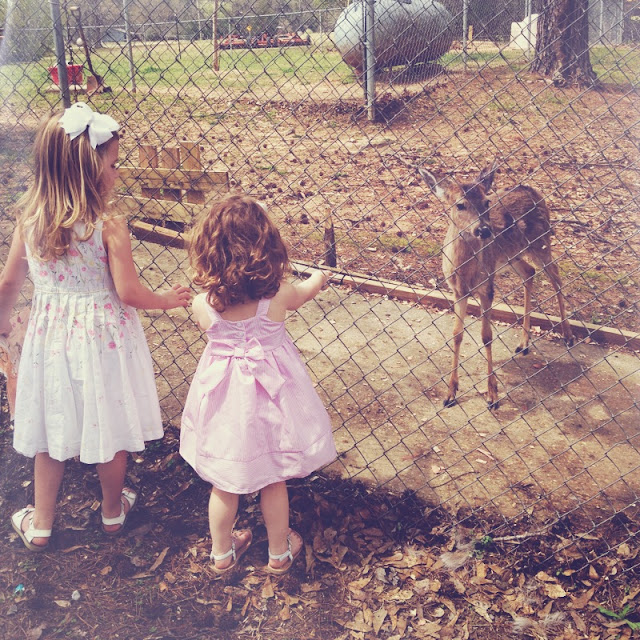 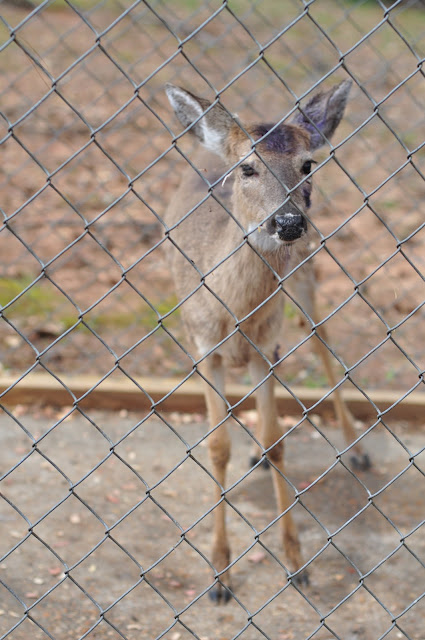 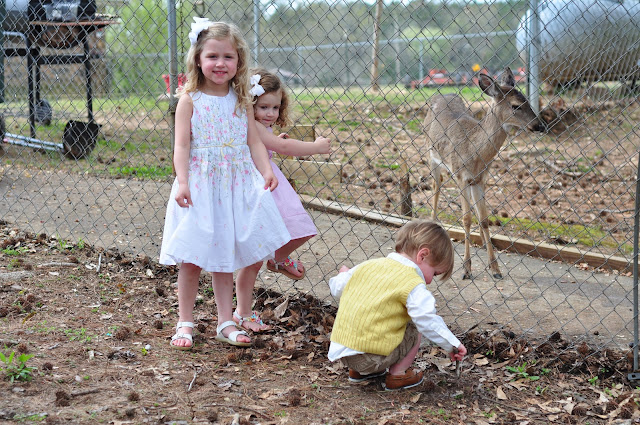 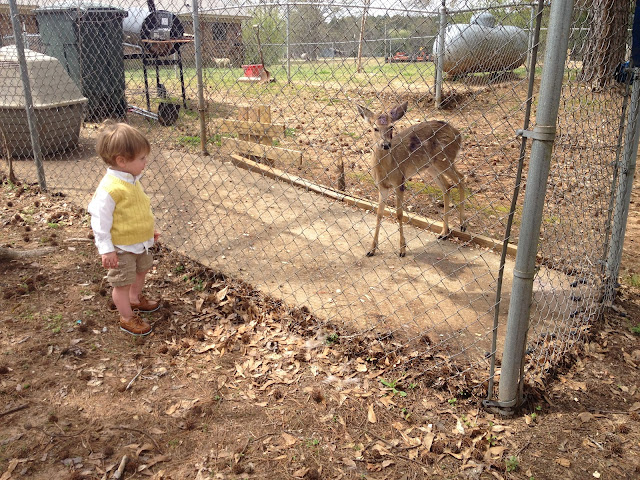 I honestly couldn't believe the little thing made it!  She was so pitiful when we found her.
And then I realized how great of a lesson it really was. 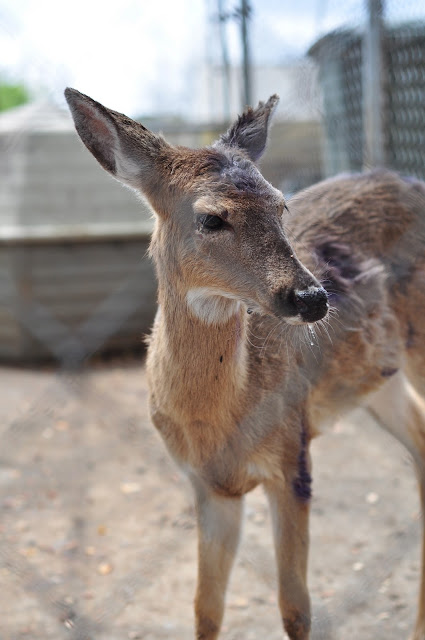 Had we not come and rescued her that day, she would surely have perished.  Either another car would have hit her again or her wounds would have become infected without the antibiotics.
Apart from our help, she was as good as dead. 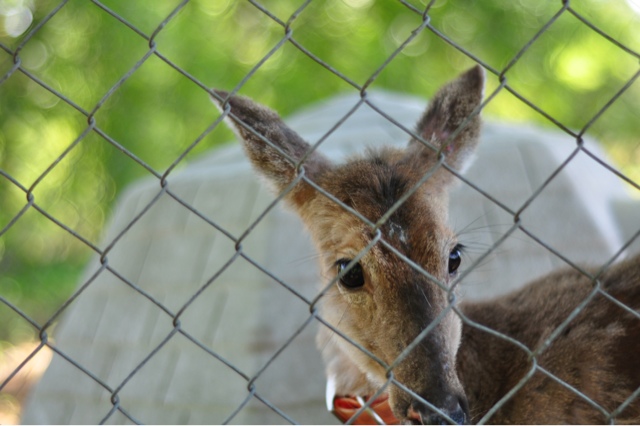 And so it is with us. We too are perishing. Apart from the saving grace of Jesus we will surely die in our sin.   We too need a rescuer to come and scoop us up out of harms way. 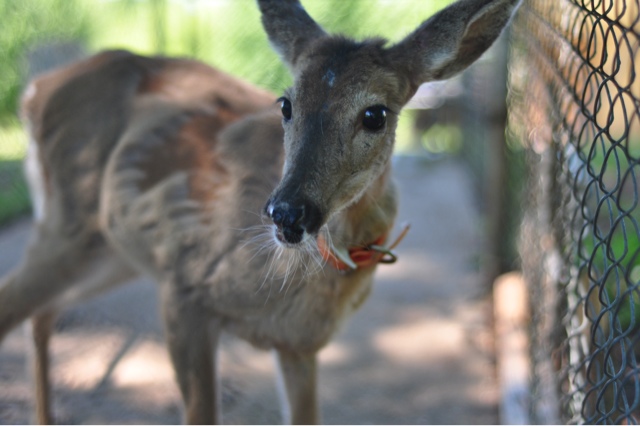 But unlike the deer, whose nature stays the same, we have a nature that can be changed.
When we are rescued, we become a new creation.  God changes who we are and what we are about.

"If anyone be in Christ, he is a new creation.   Old things have passed away. Behold: all things have become new."  2 Corinthians 5:17 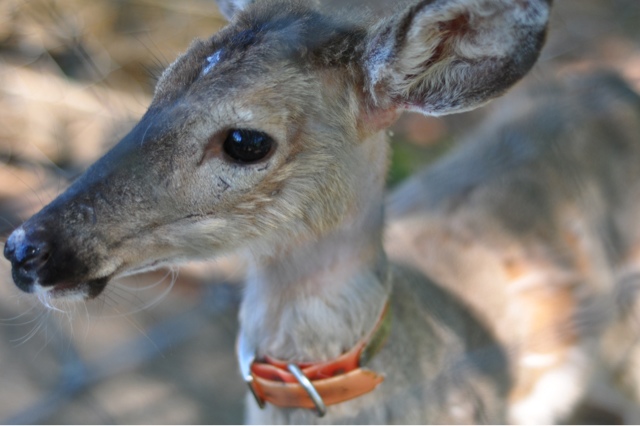 I'm so thankful that God rescued me 16 years ago from a life of selfishness with no eternal value.  I was just like the little deer...vulnerable and destined for destruction until He came and scooped me up out of harms way and delivered me.  As I watched Nick being so tender with her I realized just how patient and merciful  God has been with me over the years. He is such a loving Father that wants to comfort His children.  He wants to see us prosper and grow strong in the faith.  He wants the best for us. I'm so thankful for this teachable moment for the grand kids.....and for me. 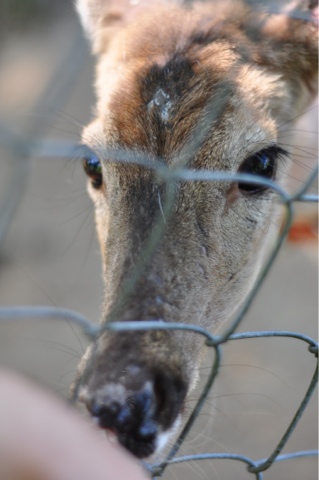 And every time we go check on Pickle Pearl this old hymn comes to mind.


Rescue the perishing, care for the dying,
Snatch then in pity from sin and the grave;
Weep o'er the erring one, lift up the fallen.
Tell them of Jesus, the mighty to save.

Rescue the perishing, care for the dying
Jesus is merciful, Jesus will save.

Happy Monday.
May we all be found doing something that makes a difference eternally.
Let's get busy.